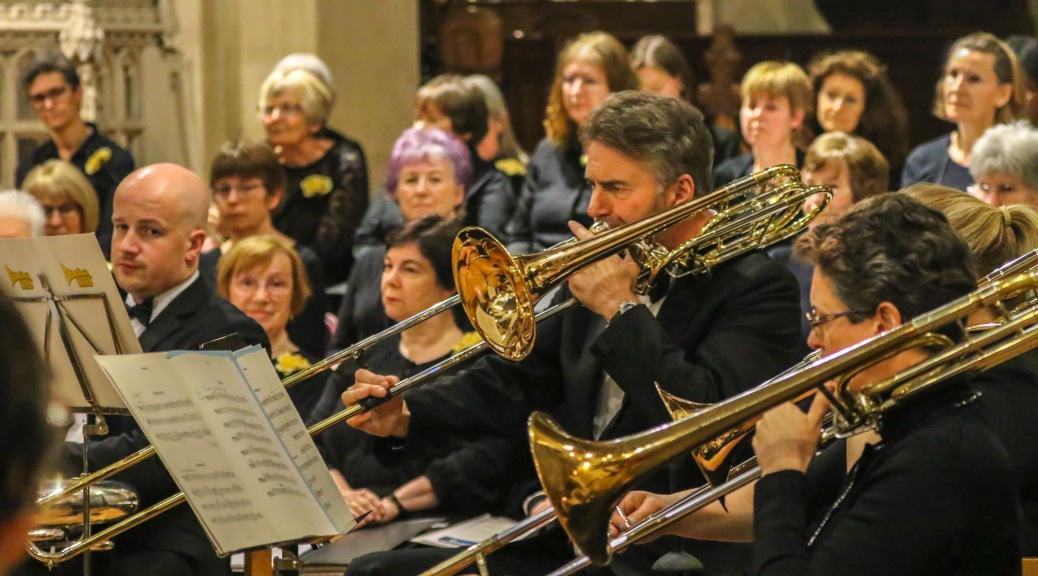 Birmingham Festival Choral Society came together with Gemini Brass on 30th March to give a concert of glorious choral music. A full choir of 90 with brass ensemble and percussion performing grand works from royal occasions, such as ‘I was Glad’ (Parry), and ‘Coronation Te Deum’ (Walton), was a wonderful experience for both choir and audience.

Brass instruments aren’t just for loud music, however. This video clip shows Nigel Turner playing the beautiful trumpet solo in the third verse of ‘The Old Hundredth’, arranged by Vaughan Williams. It was recorded during our rehearsal by fellow trumpeter Mike Bates.

The clip above and the photo below show the choir singing ‘The Old Hundredth’ from memory. Although memory singing would not be possible in long, complex works, it is very liberating to do occasionally – and the conductor loves having all eyes watching him! 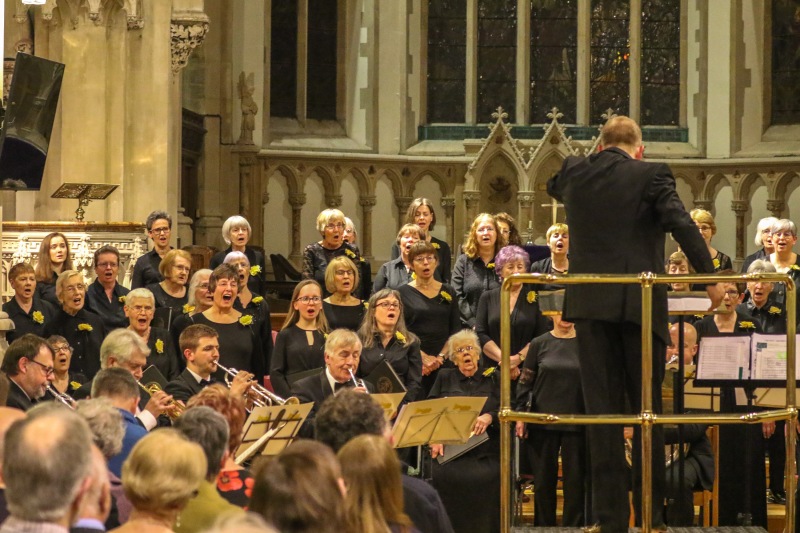 Brass and percussion are also an inspiring accompaniment for rhythmic choral works such as Rutter’s thrilling Gloria (which gave the title to the concert), and Vaughan Williams’ ‘O clap your hands’.

Contrast was provided in the concert by the beautiful melodic pieces of Will Todd and Jean Dattas. The sensitive piano and organ accompaniments were provided most ably, as always, by Kevin Gill.

The ‘Gloria’ concert included works by two composers with special links to BFCS. 2019 is the centenary of the birth of Jean Dattas, whose daughter, Sylvie, sings in BFCS and made us aware of his sacred choral compositions. Jean Dattas was a French organist, teacher and composer in Paris, then in London. It was good to have some English members of the family in the audience but, unfortunately, the French members of the Dattas family who were planning to get to the concert by Eurostar were prevented by problems both sides of the channel. We’re pleased that they were able to hear us perform Dattas’ Kyrie and Agnus Dei on tour in Burgundy three years ago.

We were also very pleased that some of John Joubert’s family were able to attend our concert to hear us perform his composition ‘O praise God in his holiness’ in his memory. John Joubert was Patron of BFCS for many years until his death in January of this year. 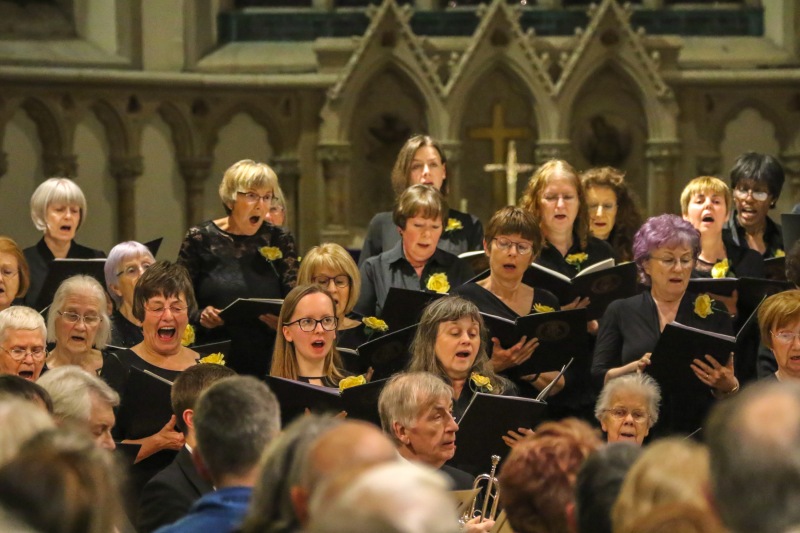 The dazzle of the brass instruments in the spot lights was nearly matched by the shiny gold shoes of our conductor, David Wynne!

We were delighted to have such a full audience for this concert, despite the clash with a lot of other concerts on the same evening. Their warm appreciation made all the hard work worthwhile. A great evening all round!

Many thanks to Alfred White for taking these excellent photos at the concert. 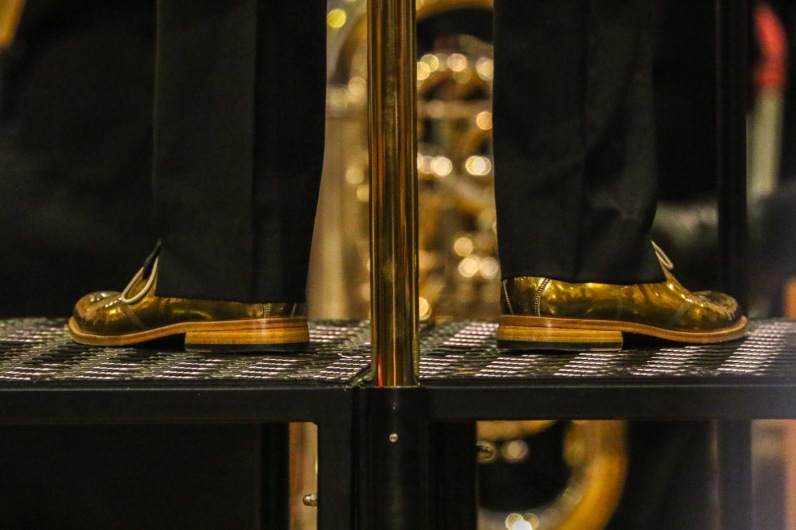 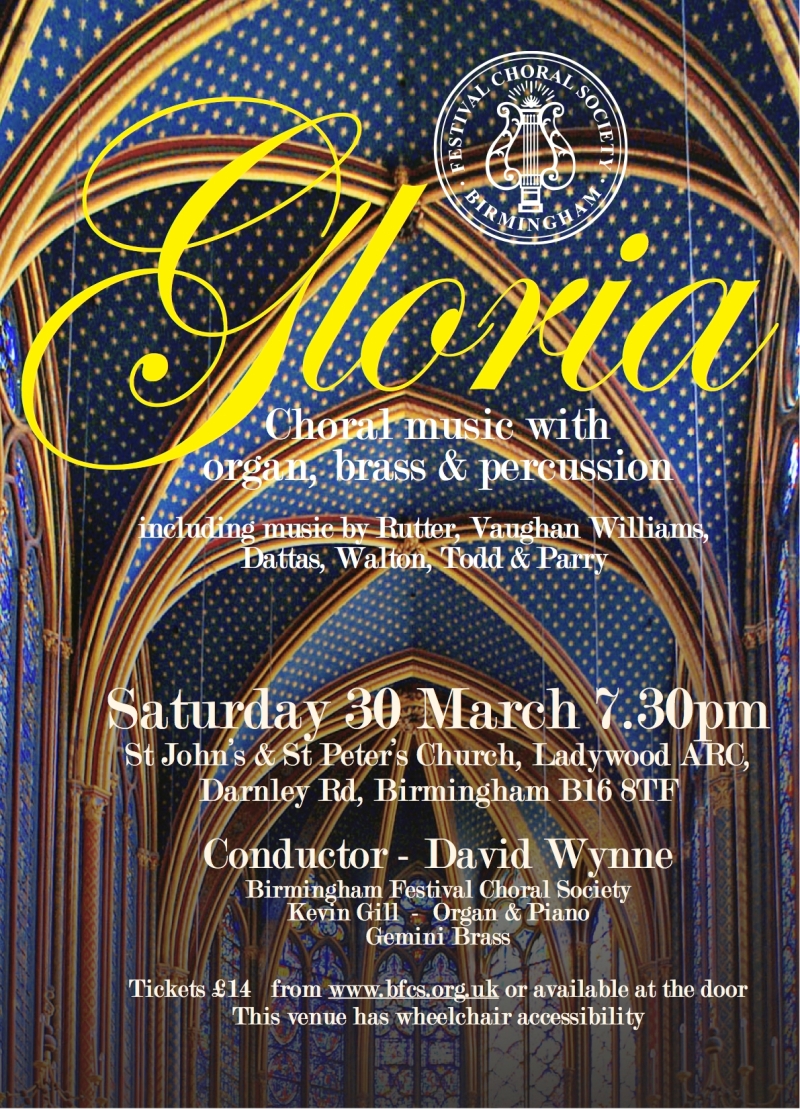 Throwback to 2019 when we sang Messiah in a packed St Alban's Church. Let's hope we'll all be back to normal concerts this time next year!
We're delighted to present our first virtual choir performance! 🎶🎶 Click on the link in our Bio if you'd like to hear us sing Mozart's Ave Verum Corpus.
The reality of zoom rehearsals! Congratulations to the 63 singers who have got to grips with the technology and regularly checked in for choir rehearsal every Wednesday. We're having a break now - back in September!
Follow BIRMINGHAM FESTIVAL CHORAL SOCIETY on WordPress.com
Loading Comments...
Comment
×