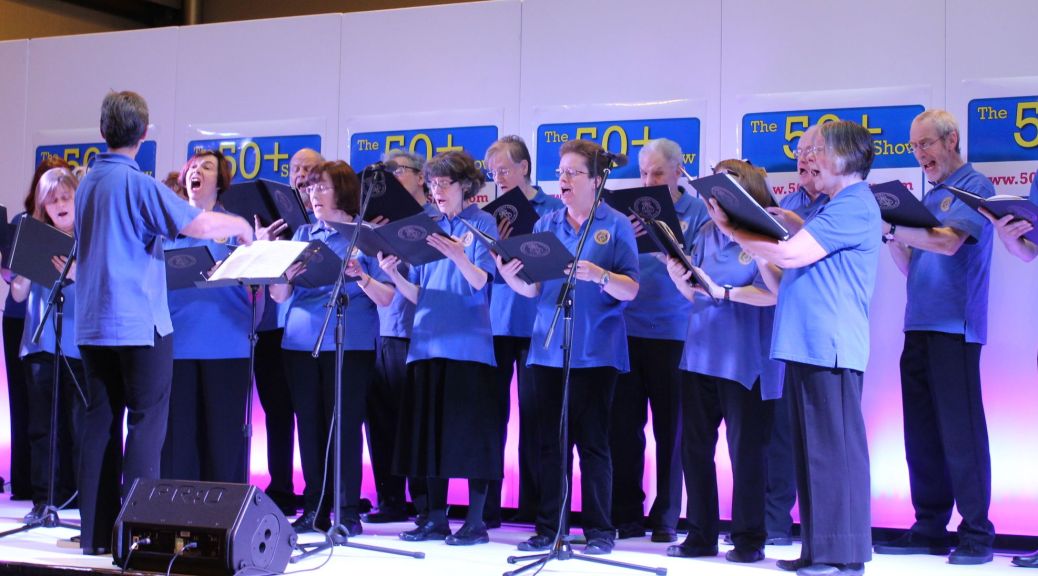 Visitors to the 50+show at the National Exhibition Centre (NEC) were treated to two 30 minute performances of popular classics from BFCS in Harmony. The programme ranged from settings of ‘Ave Verum Corpus’ by Mozart and Elgar to ‘Joyful joyful’ from ‘Sister Act, which we had sung at a wedding last year. It was great fun – and the receptive audience included someone who came up to tell us that she had sung with the Birmingham Festival Choral Society many years ago, another who was interested in joining in the future, and others who asked for details for booking BFCS in Harmony.

BFCS in Harmony is a small offshoot of the big Birmingham Festival Choral Society (BFCS), and is available to hire for weddings, Christmas carol singing and other events. It is led by Margaret Jones, who also sings contralto in the big BFCS.

Contact details can be found by clicking here: Hire BFCS in Harmony

BFCS in Harmony singing at the 50+ exhibition (NEC)

BFCS in Harmony receiving applause at the end of their performance.

Our concert on 1st April contains a wide variety of popular choral music, in keeping with our ‘Nocturne’ theme. This will be the first BFCS concert conducted by our new Music Director, David Wynne! We hope that you will be able to share it with us. 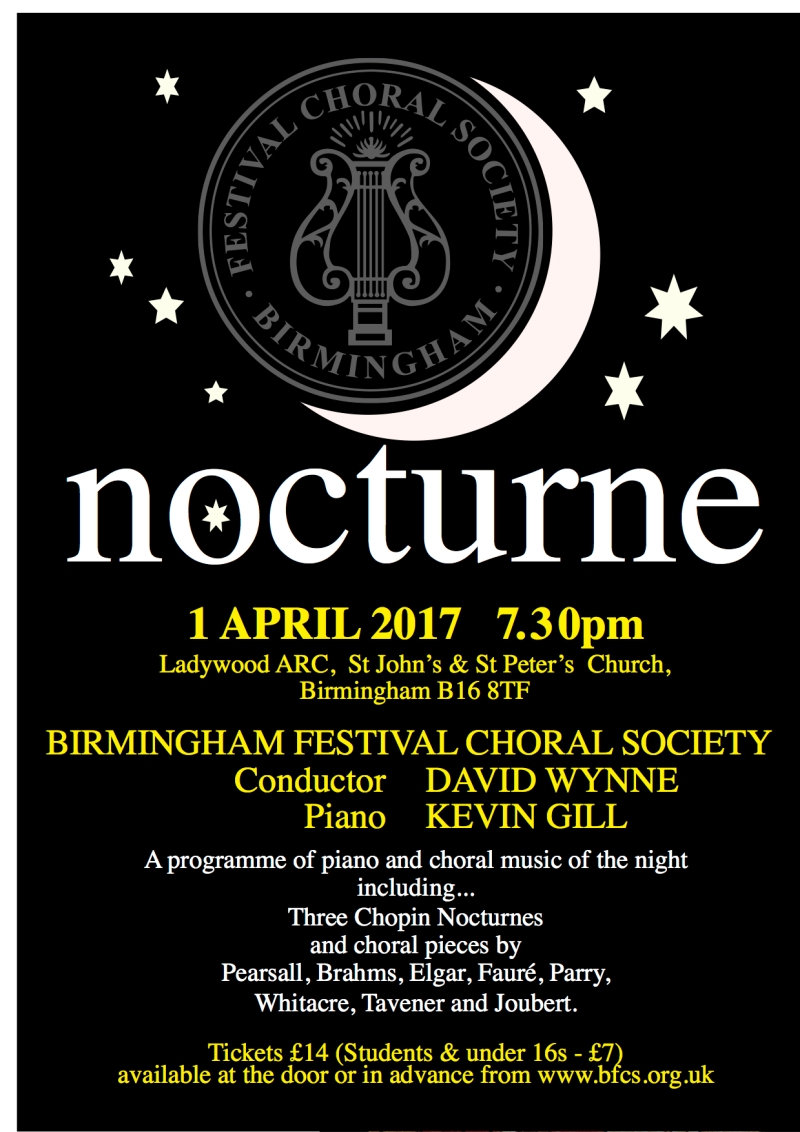 Have you made a New Year Resolution to join a choir? Come along to our free Open Rehearsal next Wednesday, 4th January and give us a try, with no obligation! We recommend arriving at 7pm, in order to find your way around and meet some singers before the rehearsal starts at 7.15pm. Please pass the message on to any prospective singers you know.

More information about the choir can be found here: Join our choir

Next Wednesday is also special because we will be welcoming our new Music Director, David Wynne. There will be an extra long coffee break (with cake!) to give us time to get to know each other.

There is some lovely music coming up this term, so we do hope that new singers will choose to join us in preparing for our next concert:

Christmas music filled the air at Ladywood ARC last Saturday. A recorder quartet greeted our guests with Christmas music as they arrived. The lights were dimmed, candles were lit, and the choir processed down the sides of the church to take their places and sing ‘Gaudete’.  BFCS sang carols old and new, and invited the audience to sing the traditional carols with us. Kevin Gill conducted the choir and introduced the programme – the final concert in his term as caretaker Music Director.

We were moved by the short talk from ‘Crisis at Christmas’, particularly the testimony of a young student from Azerbaijan, who had been homeless until Crisis helped her get on her feet. She now has a job and can support herself.  Singers and audience gave generously and raised £908 for the charity.

We were delighted that the Lord Mayor of Birmingham could attend our Carol Concert, accompanied by the Lady Mayoress. As Councillor Carl Rice, he represents the Ladywood Ward. Crisis at Christmas is a charity they both support. We would like to thank the Lord Mayor for taking the atmospheric candlelit picture of the choir, and posting it on Social Media.

The concert was followed by mince pies and mulled wine, and much conversation.

The small singing group ‘BFCS in Harmony’, led by Margaret Jones, entertained the Residents of Queen Mother Court, Selly Oak, with Carols on Monday 19th December, and our final Christmas event will be the leading of carol singing at ‘The Highfield’, Edgbaston, on Friday 23rd.

Conversation after the concert 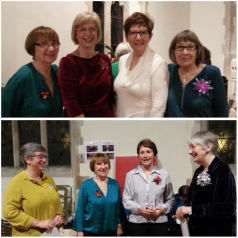 The Lord Mayor speaks to representatives of ‘Crisis’. 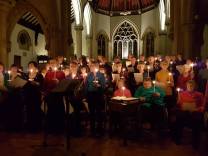 The Choir by Candlelight. (Photo taken by the Lord Mayor)

Shelter is marking its 50 year anniversary, and the concert was shared with ‘The Choir with No Name’ which includes singers who are, or have been homeless. It was a privilege to share in such an event, and to hear about the important work of the charity.  The Lord Mayor of Birmingham, tweeted the following pictures and appreciation after the concert. Click to see tweet in full:

I just wanted to say from myself and on behalf of everyone at Shelter thanks to you and to everyone at the Birmingham Festival Choral Society for being part of our first carol service in Birmingham.

I personally very much enjoyed your performance pieces and it was wonderful to have the BFCS voices supporting in the congregational carols. It was hairs on the back of the neck stuff for me!

Please do pass on my thanks to everyone who was involved and we hope you all have a very Merry Christmas. 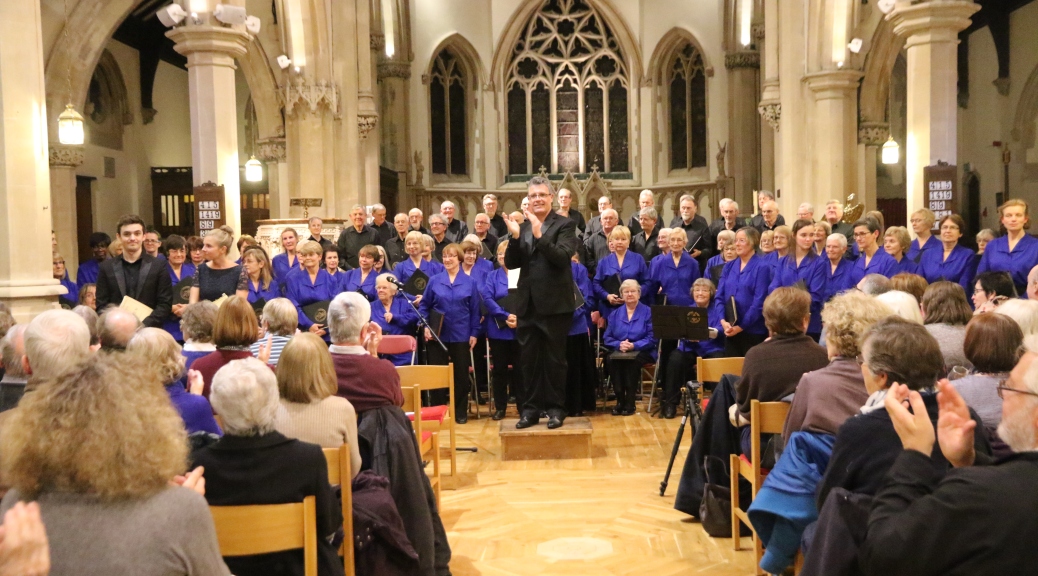 Sylvie Dattas introduces the work by her father, Jean Dattas. 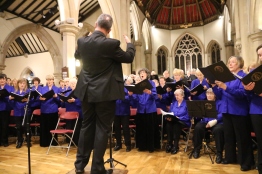 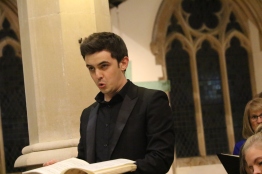 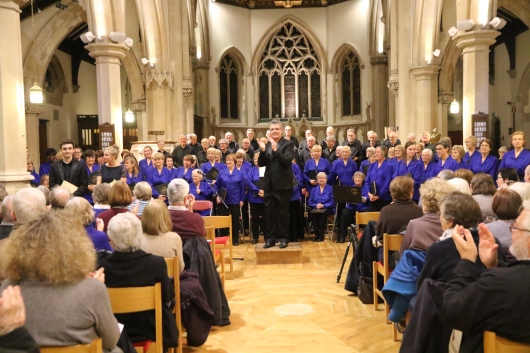 The soloists take the applause.

A full church to hear the ‘In Paradisum’ concert.

Many thanks to Alfred Whhite for these pictures of our concert last Saturday. The beautiful music by Fauré, Duruflé and Dattas was enjoyed by both the choir and the capacity audience.

One member of the audience sent the following message to our Birmingham Festival Choral Society Facebook page:

Thank you for a lovely evening of music. The Faure pieces were sublime! 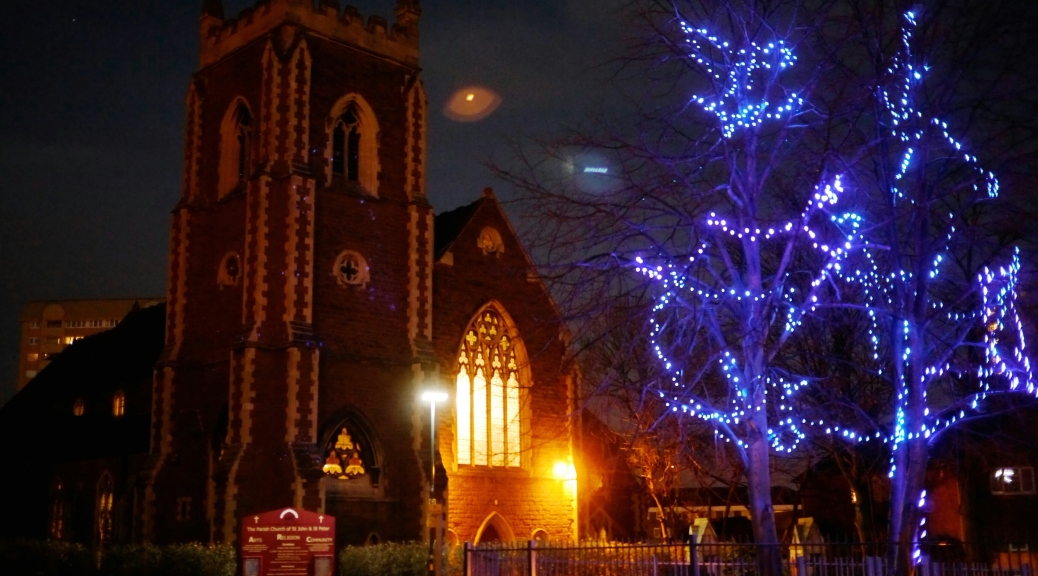 Join us for our Christmas Charity Concert on Saturday 17th December at 6pm!

Carols for choir and audience, followed by Mince pies and mulled wine.

All proceeds to ‘Crisis at Christmas’.

We are delighted to announce that David Wynne is to be our new Music Director.

David will take up his new post in January. It promises to be an exciting future!

David has been Music Director of the Ryton Chorale since 2013 and Arrow Vale Singers since 2012. He graduated from Birmingham Conservatoire with a Masters degree in Vocal and Operatic Performance (studying as a bass-baritone) and has been a soloist in both oratorio and opera. While at the Conservatoire he was awarded a scholarship to study choral conducting with the influential conductor Paul Spicer.

In addition to his conducting posts David is closely involved in educational work: he is co-founder of the St Chad’s Choral Outreach Programme in Birmingham, and teaches and conducts at the Birmingham Junior Conservatoire.

Further information will be found on the link below.

We hope you will be able to come and enjoy this much loved music with us.

Beautiful Requiems by Fauré and Duruflé.

Read the programme notes below to get the background to this French sacred music.

Welcome to a fascinating French evening, featuring three composers from very different epochs in the country’s history – linked to each other, and united in their love of choral and liturgical music.

The first mass which you will hear is by Jean Dattas (1919-1975), who was organist at Notre-Dame in Paris from 1949.  He studied under Marcel Dupré, Alfred Cortot, and Olivier Messiaen.  He moved to London in 1955, but for many years he returned every summer to play the organ at Notre-Dame.

Maurice Duruflé (1902-1986) was a good friend of Jean Dattas.  He was a well-known church organist in Paris, who was appointed as a teacher in the Conservatoire shortly before the Nazi invasion.  When he was commissioned in 1947 to write a Mass, he was already working on an organ suite, using themes from Gregorian chants.  He incorporated his sketches for that suite into the Requiem, and this background gives the work its distinctive character.

The Requiem, which was dedicated to the composer’s father, has notable similarities to the better-known version by Gabriel Fauré (1845-1924).  Both are sensitively written, allocate the Pie Jesu to a soprano soloist, and finish with the quiet and meditative In Paradisum.  However, Duruflé’s setting is more sensitive to the words of the liturgy, and more closely modelled on plainchant melodies.  The original version was scored for a huge orchestra and organ, but we are using a later version, with organ alone.

The music beautifully captures the moods of the varied texts, most thrillingly in the Dies irae part of the Libera me movement.  Intriguingly, Duruflé concludes his Requiem with an unresolved discord, an unanswered question as it were.  Is this perhaps a reflection of the appalling experiences that the composer and his fellow-Parisians had so recently endured in the war?

Listen to ‘Libera me’ from Duruflé’s requiem here:

When Duruflé joined the Paris Conservatoire in 1920, Fauré, aged 75, was its director.  The youngest of six children, he had been the only one who showed any musical ability!  This was recognised early, and he was sent to a new music school in Paris at the age of nine.  When its founder, Louis Niedermayer, died in 1861, Fauré’s new piano teacher was Camille Saint-Saëns.  A few years later, he composed the serene and atmospheric Cantique de Jean Racine, which not surprisingly won him the school’s top prize.

His Requiem, undoubtedly his best-known work, was not composed for a particular occasion; indeed, it was started in the 1880s and did not reach its complete form until 1900.  It is interesting to note how this piece runs counter to most of the trends of the time. Most composers favoured large and loud orchestras and complicated textures (Wagner was much in vogue).  This Requiem, by contrast, is deliberately smaller-scale and contains comparatively little fortissimo singing – perhaps partly because Fauré was strongly influenced by the phrasing of Gregorian chant.

In his setting of the Requiem, Fauré followed the example set by Brahms’s German Requiem, which aimed to comfort the living rather than dwell on the fears of hell.  Fauré agreed with this approach, and the text of his Requiem omits the menacing words of the Dies Irae.  He said, “Everything I managed to entertain by way of religious illusion I put into my Requiem, which moreover is dominated from beginning to end by a very human feeling of faith in eternal rest.”  The result is a very varied piece, veering from sombre to sunlit in mood; we hope it will lift your hearts this evening, as a beautiful climax to the concert.

Listen to the beautiful Sanctus from Fauré’s Requiem here:

Read our latest Newsletter to see our plans for the 2016/17 season:

If you’d like to receive our Newsletters in your Email In box, you can subscribe via the link in the left column of this website. Make sure that you don’t miss any of our news!

Keep the evening of Saturday 26th March free for our choral jazz concert 'Passion Music'! We will be singing two works by the exciting British composer Will Todd: Passion Music and Mass in Blue. @will_todd_music
He came! Santa arrived at our concert, distributed sweets to the children - and then joined the choir for our Christmas medley. What a talented chap!
Repost @crisis_skylight_birmingham : 'What a fabulous evening it has been. A huge and special thank you to everyone who shared a testimony with us tonight, to all our readers and volunteers, to the wonderful St Martin’s and the fantastic Birmingham Festival Choral Society (pictured here singing Nativity Carol), and to everyone who came out to experience all of this with us! We really hope you enjoyed it as much as we did 🥰 #crisisxmas
Follow BIRMINGHAM FESTIVAL CHORAL SOCIETY on WordPress.com
Loading Comments...